When Jeff Chanesman is not working on security configurations, hardware re-configurations, or any of the multiple tasks he performs daily for Hedgehog's clients, he is moonlighting at NoVa Labs here in Reston, Virginia as a jack-of-all-trades. 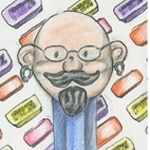 When Jeff Chanesman is not working on security configurations, hardware re-configurations, or any of the multiple tasks he performs daily for Hedgehog's clients, he is moonlighting at www.nova-labs.org

here in Reston Virgina as a jack-of-all trades. Nova Labs is a membership-driven, all-volunteer, makerspace based in Reston, Virginia that was founded in 2011 with the purpose of empowering everyone to Rediscover the Joy of Making Things!

If that doesn't sum up Jeff, I am not sure what does. In a short time, Jeff has become the the laser steward, which holds responsibility for the lasers upkeep and he is in the process of rebuilding the computer for its usage. He has helped NoVa Labs network their two buildings and now the lego robotics kids would have internet, which is much needed fore their projects. He teaches classes on using the vinyl cutter and embroidery machine that he personally donated to the lab. He hosts woodworking open shop on Wednesday nights that includes a full wood shop and CNC machines. He loves to boast that they have the rc-4 series routers.

If that is not enough he co-hosts the maker circle and arts group every other Friday which includes crafts from old world, such as book binding, to cutting edge, pardon the pun, laser crafts and 3d printing. While he was recently asked to be on the board of NoVa Labs, he respectfully declined, but offered to serve on the committee for finding new board members.

In the end, if there is a need for overall help at the facility or if they need someone to serve as a fly on the wall for things like networking and server setup, Jeff has made himself an integral part of what they do at NoVa Labs. There are many people, especially children, that are the beneficiaries of Jeff's "Labor of Love" and we are very proud of all that he does to encourage everyone to rediscover the joy of making things.

Way to go Jeff! Keep up the good work.